A ruined building and a large yard held two great secrets. The first, the structures of a 16th-century house, which is said to have belonged to the Barreto's family, lords of the "Morgado de Quarteira". The second, hidden beneath the floors and foundations of this stately home, was a Hammam (a bath complex from islamic era), unique in Portugal for its state of conservation, built and leaning against the wall from the same period.

The museographic project was adapted to the architectural design, which divides the museum into two large rooms: the first, which exhibits the objects found over several years of excavation and a section of the Islamic wall, observable from a balcony; in the second room we find the remains of the stately home and, below the visitor's feet, the three rooms of the Islamic baths. 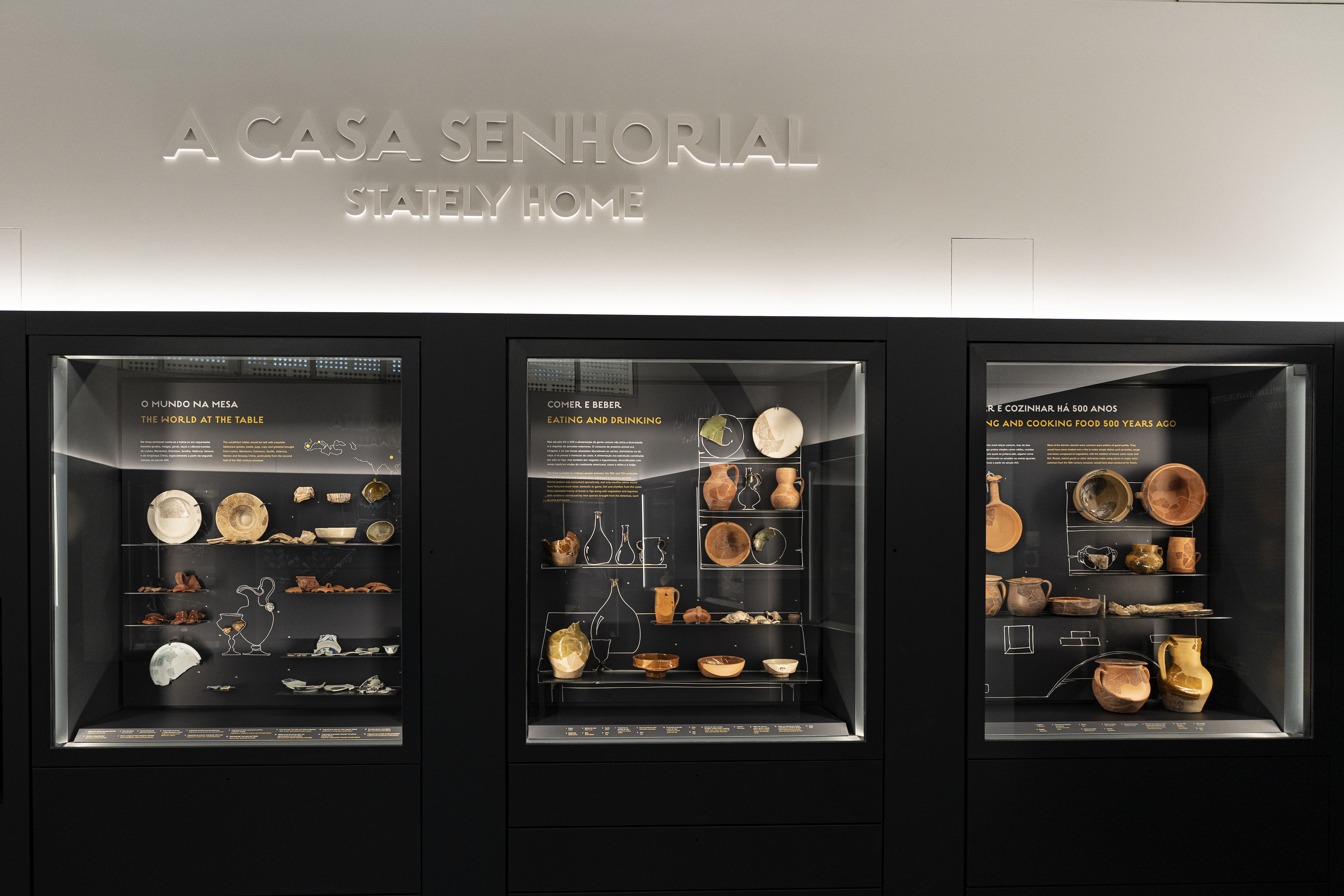 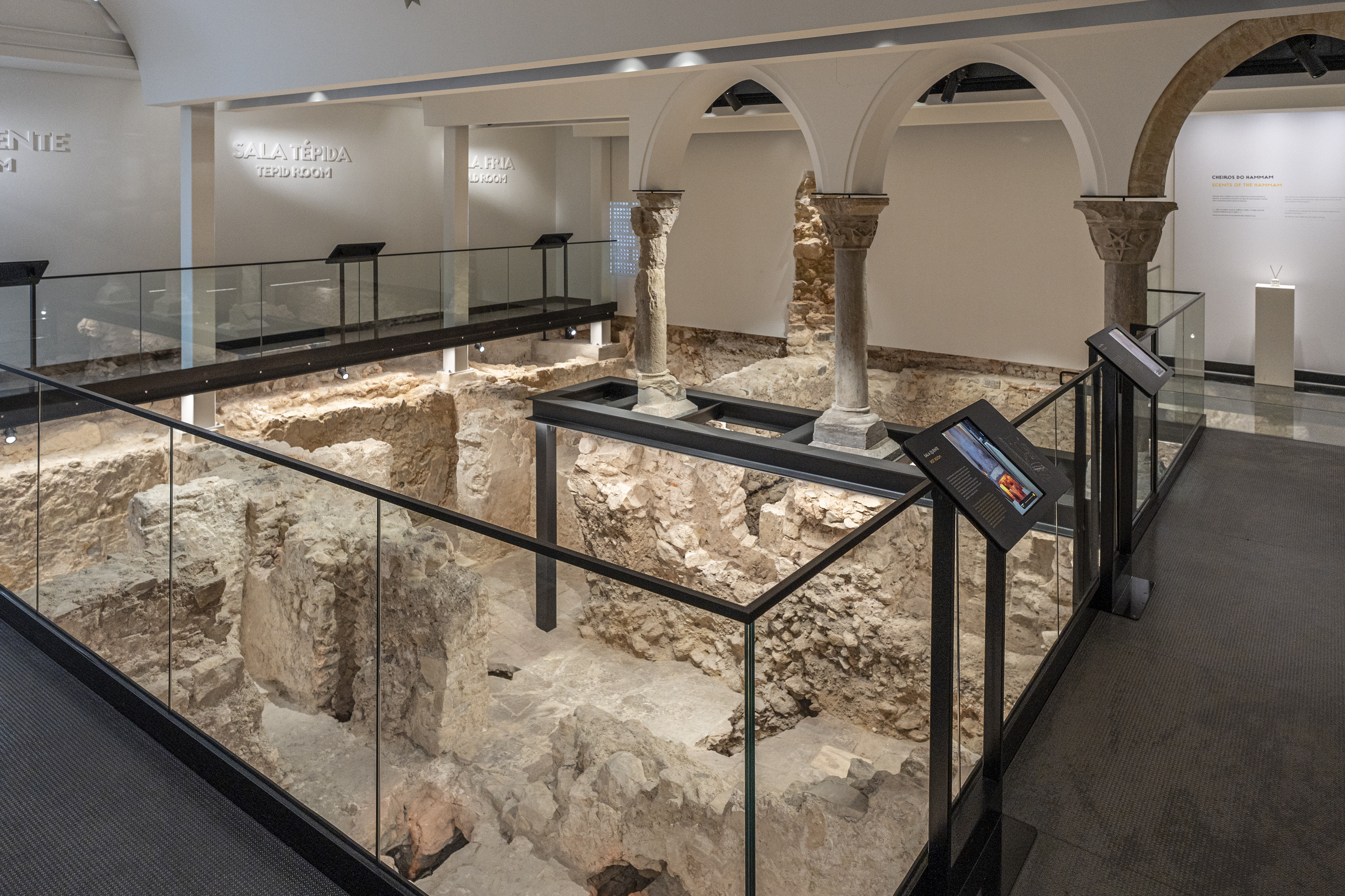 Thus, in thinking about the visitor's museological journey, we have created a story that develops chronologically in reverse order, that is, from the present (which we see first) to the past (which is located underneath that one), divided into three major thematic blocks: the stately home from 16th-century, the building of the Islamic Baths from 12th century, which must have been used until the 15th century; and the City Wall, as a transversal element in space and time, which must have been built at the end of the 11th century.

Our great museographic challenge was in the first room, dedicated to the exhibition of archaeological objects. The truth is that many of the archaeological pieces are only small fragments of a larger object, such as spearheads, ceramics or game pieces. So we created larger illustrations that give environment context to the archaeological objects. Thus, we illustrated each display case, so that the spear has a real size; the ceramic pieces were transformed into plates and bowls, organized on the shelves in the living room and kitchen; and the small game pieces are displayed on the board, in their playful environment, to help the interpretation and understanding of all visitors. 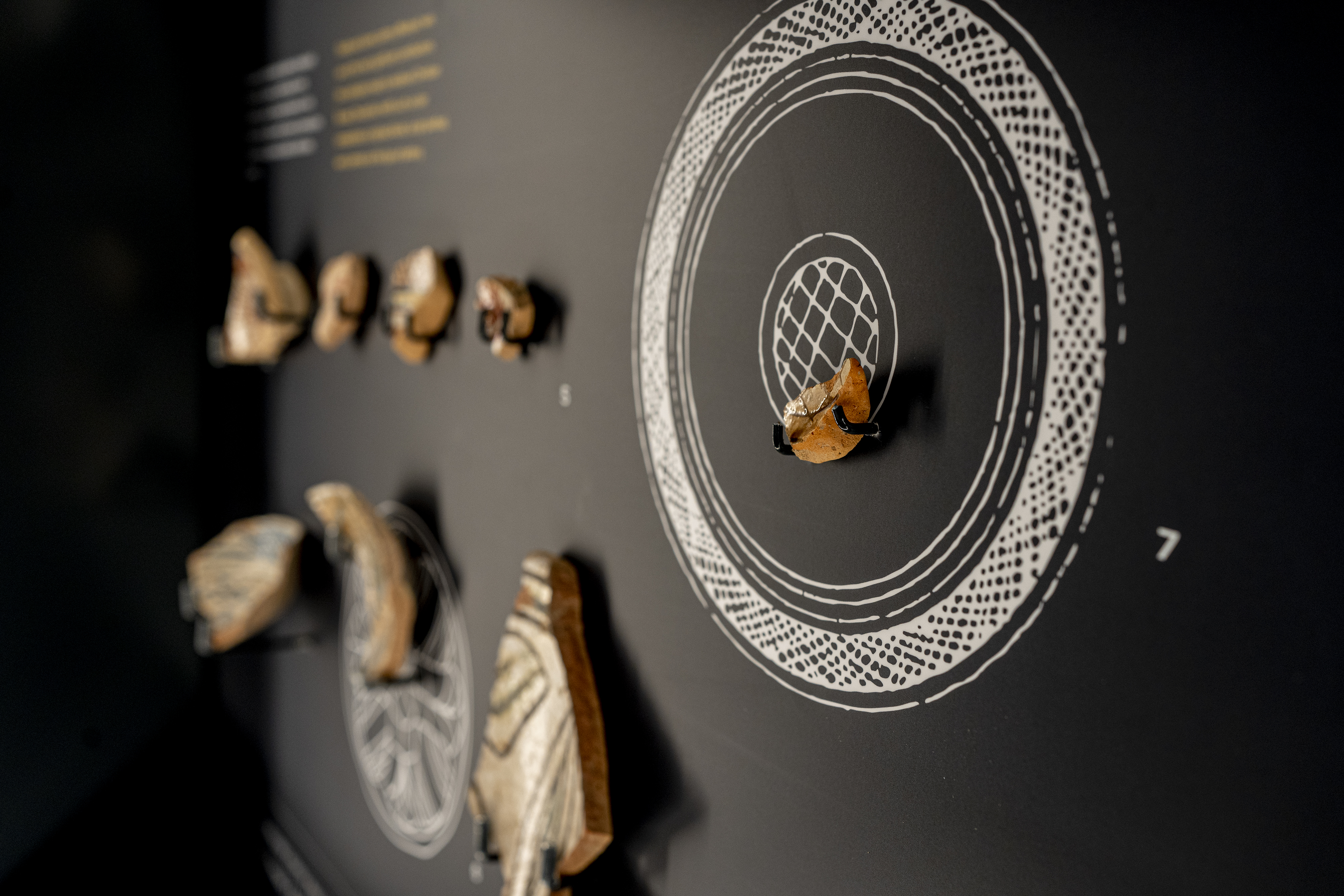 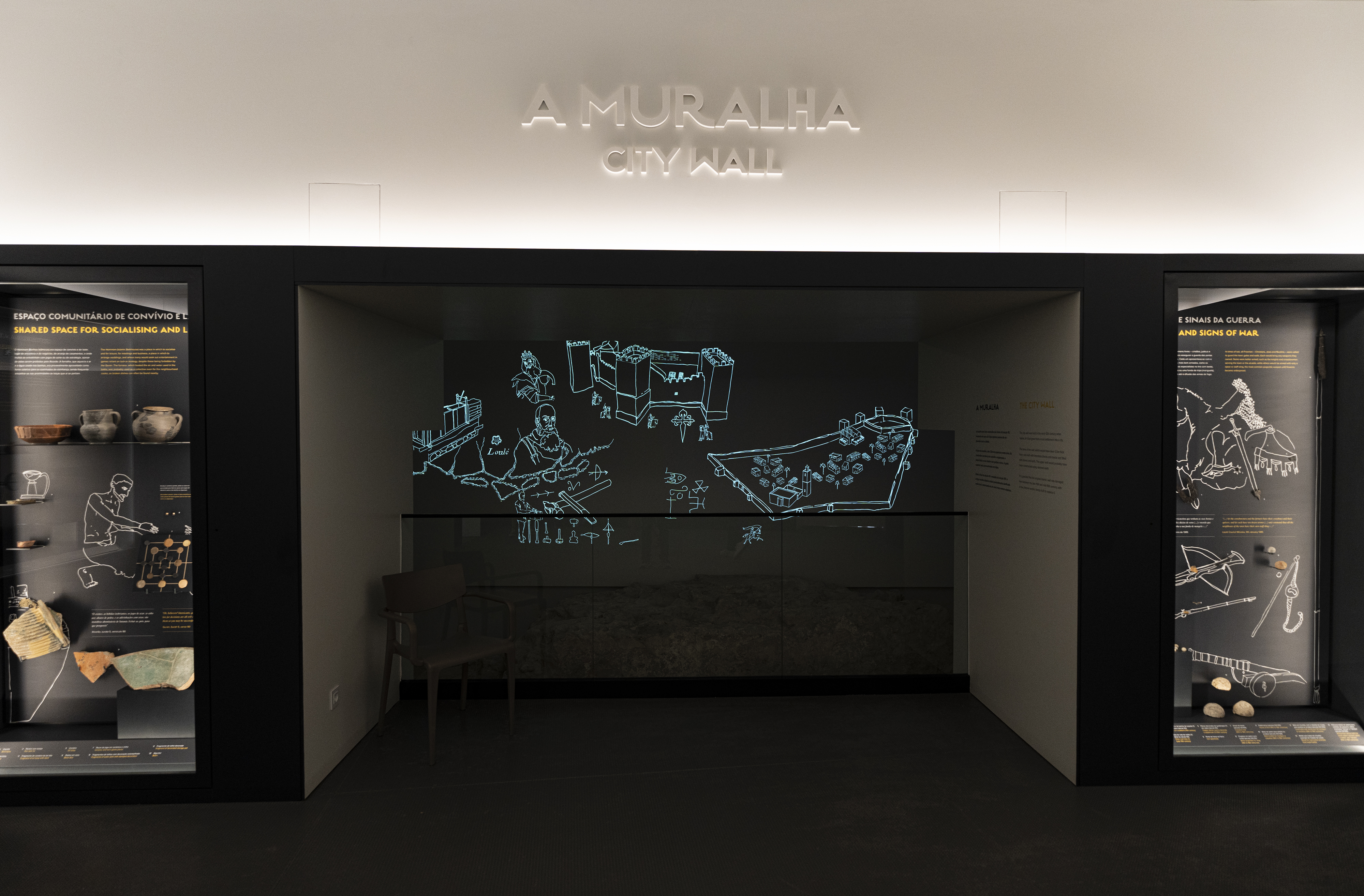 At the end of the same room, it is possible to observe part of the ruins of the wall, from a balcony. A large illustration appears at eye level, which may seem complex to the naked eye, but which gains context through the video mapping projected onto it. The illustration aggregates all the parts of an animation that tells the story of the wall, from the 11th century to the present day, inviting visitors to come close to the balcony and observe the wall from below. 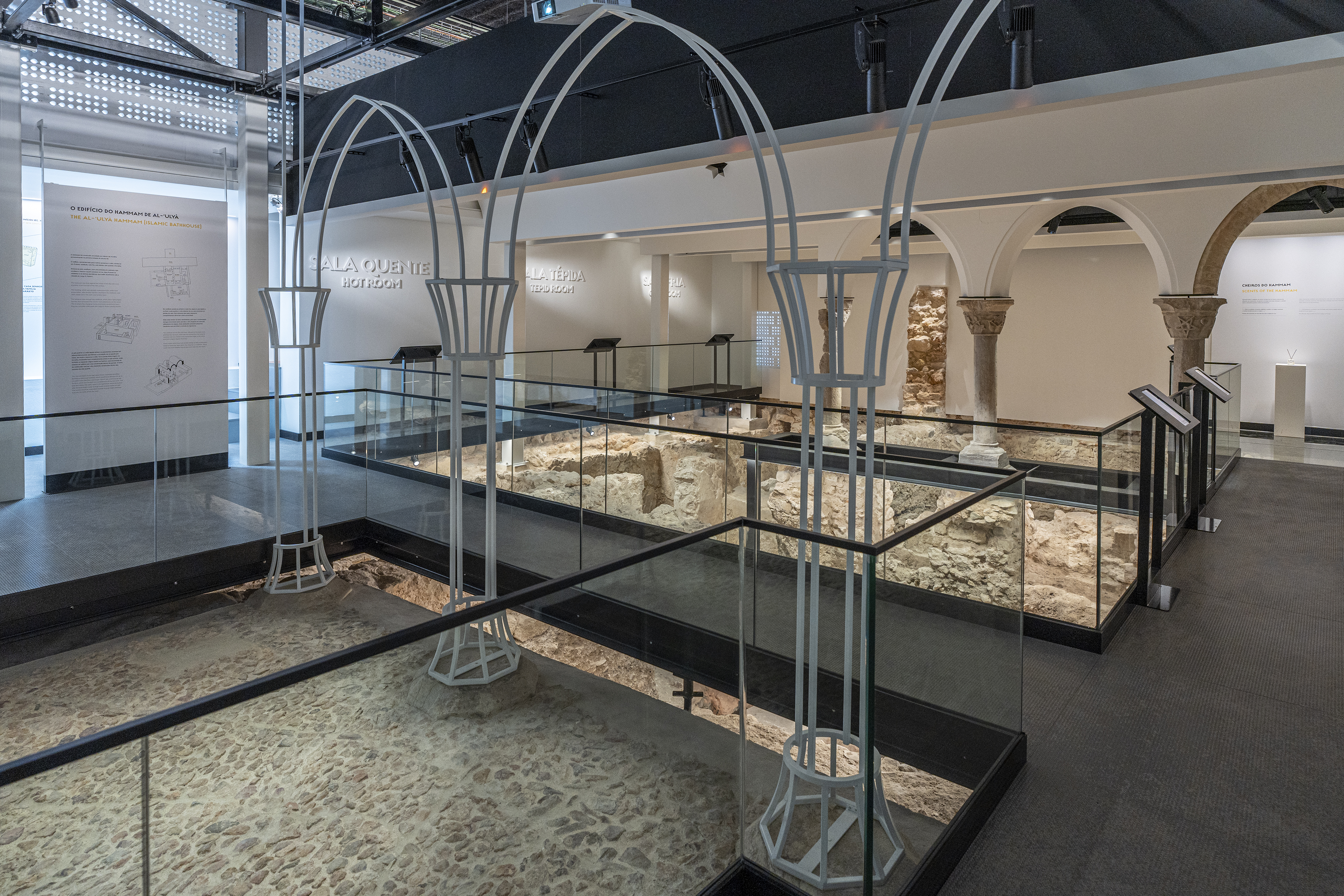 As we enter the second room, we are put into context about the two buildings, throughout their five centuries of history. In the area dedicated to the manor house, a panel was created, where we drew the various phases of construction of the house over time, as well as its most characteristic elements, such as the arches and columns, whose ruins are at the horizontal level of the visitor. Through video mapping, we tell the story of the house over the centuries, making it easier to interpret the space.

For the area dedicated to the Hamman, we developed an app of augmented reality, which will allow an interaction between the visitor and the ruins that are at the lower level. For this application, the original architecture of the three rooms has been recreated in 3D: hot, tepid and cold. And in each room it is also possible to observe the ritual of the public baths, with a 3D character performing their hygiene. This recreation is perfectly aligned with the rooms, which allows a better interpretation of the archaeological space.

This is a space of memory, where another important chapter in the history of Loulé is told. 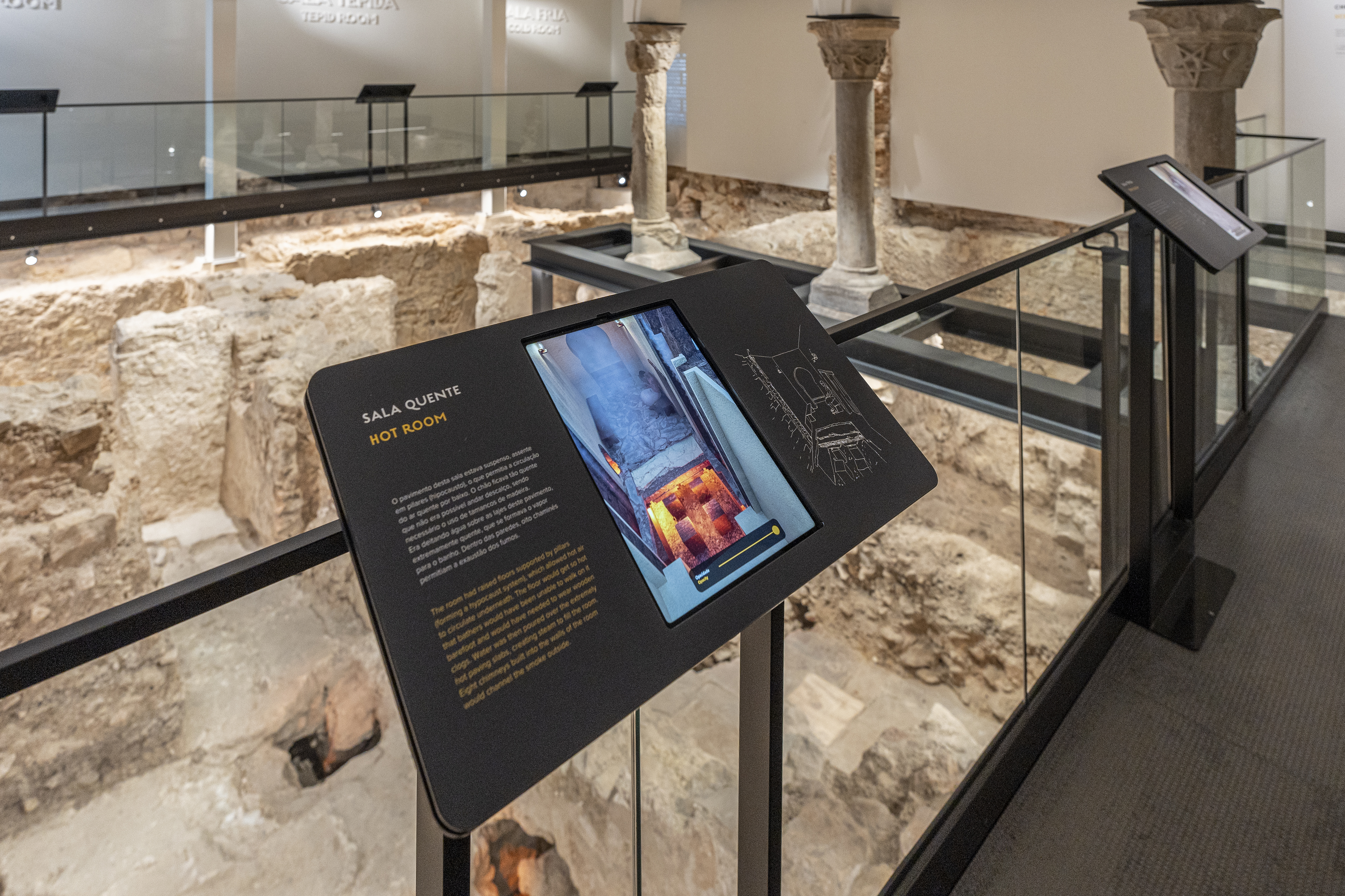 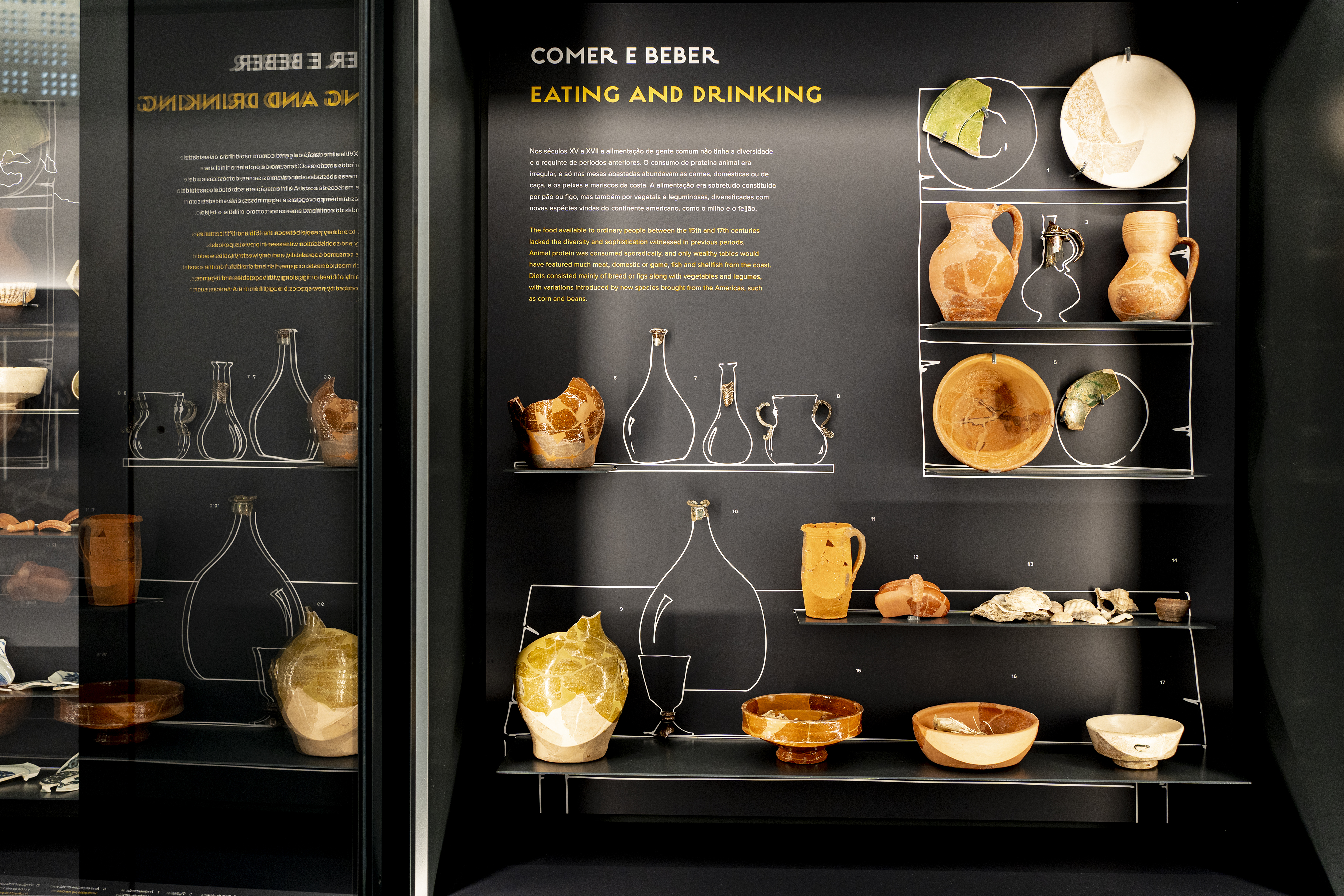 Museum of Archeology and Ethnography of Elvas 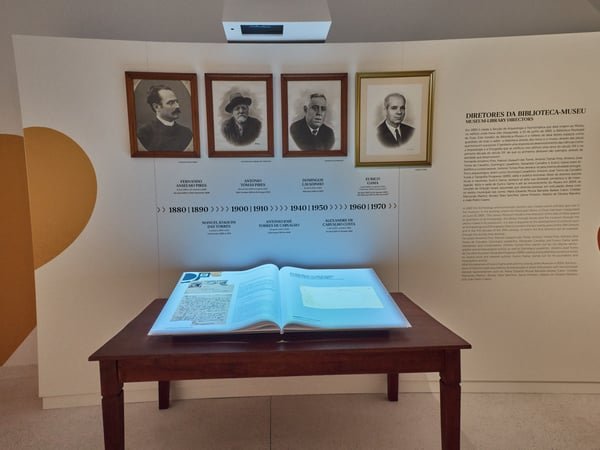